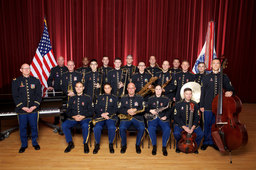 "The Greatest Generation" is a tribute to the men and women of World War II. Enjoy classic Big Band Era songs while the story of the war is told through pictures and videos. "The Greatest Generation" focuses on the American sentiment, resolve and unity that defined this generation with narration that features letters written to and from servicemen and women during the war, as well as famous quotes from the likes of Presidents Franklin D. Roosevelt, Harry S. Truman and Dwight D. Eisenhower. Purchase tickets online

Saturday, March 14 at 7:30 p.m.
Join us as Celtic perforners, Blackwater, close out the Black Box Series. Just in time for Saint Patrick's Day, Blackwater's high-energy music will have you dancing a jig in your seat. The band blends folk, classical, and contemporary music to create a truly unique sound. If you love Irish music, you won't want to miss this show! Learn more and get tickets! 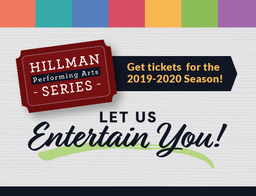 Back for our 14th season, the Hillman Performing Arts Series has something for everyone, from our intimate black box shows to our engaging main stage shows! This year's series is comprised of seven shows, including a Grammy Award-winning musician, a world-renowned mentalist, a jazz pianist/vocalist, a holiday a cappella show, an African-American music tribute, a high-energy Celtic band and a vaudeville circus group! Check out the lineup and subscribe today!

The Hillman Center for Performing Arts is seeking artists to showcase their work at the Hillman Center during shows and events. Learn more about being a part of our Emerging Artists Series.

Located just 20 minutes from Pittsburgh's Cultural District on the Shady Side Academy Senior School campus in Fox Chapel, the Hillman Center for Performing Arts is one of Western Pennsylvania's newest artistic venues. Whether attending a professional performance, a student production or a community event, you're sure to enjoy all that the Hillman Center has to offer! Learn more.